When people before the Montgolfier brothers thought of human flight, they pictured birds. Leonardo da Vinci was one of the few who proposed a different concept, the helicopter. But early in the 17th century the barometer was invented by Evangelista Torricelli, and Blaise Pascal used it to show that not only does air have weight, but also air density decreases with altitude. Soon the Jesuit monk Francesco de Lana realized that an evacuated globe should float on the heavier air. A Dominican friar, Joseph Galien, pictured capturing less dense air from the top of a mountain and dragging it downhill until it reached a level that would cause a craft attached to it to float. These impractical schemes embodied the idea that flight could be accomplished by the quiet mechanism that buoys a ship in water instead of by frantic activity.

Joseph and Jacques Etienne Montgolfier came from a family of paper makers, so it should come as no surprise that their idea for flight would be realized in paper. All accounts credit older brother Joseph with the original notion, but differ on whether it was inspired by watching bits of burning paper fly into the sky or by reading about experiments that described different gases with different weights. The brothers are thought never to have understood that a hot-air balloon floats because warm air is less dense than cold air. Instead, they believed that burning produced a gas different from air that was also lighter than air. In any case, Joseph began in 1783 with a small paper balloon filled with hot air by holding it over a fire. A stronger silk balloon, similarly inflated, rose to about 21 m (70 ft). By June 4 of that year the brothers had made a sphere 11 m (36 ft) in diameter of linen lined with their family’s paper to retain the gas. Their first public demonstration was in Annonay, France, south of Lyon and west of Grenoble. The balloon rose to a considerable height and floated in the air for ten minutes, coming down about 2.4 km (1.5 mi) away from the launch site. On landing, however, the fire suspended below the balloon lit the paper and the balloon burned.

Word of this experiment quickly reached Paris. A public fund was set up in Paris to have a local scientist, Jacques Charles, duplicate the Montgolfier feat. Charles, however, did not know how the Montgolfiers got their balloon to fly. He had been experimenting with hydrogen, which he knew to be lighter than air. Therefore, he began constructing a hydrogen balloon. He had to produce thousands of times as much free hydrogen as had ever been previously made –– hydrogen had been known for less than 20 years. Charles and his assistants managed not to blow themselves up and succeeded in conducting the semipublic experiment –– you had to have a ticket to get close to the 3.6-m (12-ft) balloon. When released, it shot straight up and quickly disappeared.

In the meantime, Jacques Etienne Montgolfier was also in Paris trying to arrange for a public demonstration of his own. He secured the support of Louis XVI and funding from the government. The second full-size hot-air balloon was 21 m (70 ft) tall, 12 m (40 ft) wide, and decorated like 18th-century wallpaper. This was because It was constructed with the help of another paper manufacturer, Jean-Baptiste Révillon, who made wallpaper. Unfortunately, the first attempt to fly the balloon ended in disaster when heavy rain dissolved the wallpaper. A third balloon was built, this time from taffeta coated with varnish. This balloon carried a sheep, a rooster, and a duck for about two miles in about eight minutes, landing gently enough not to harm the animals. 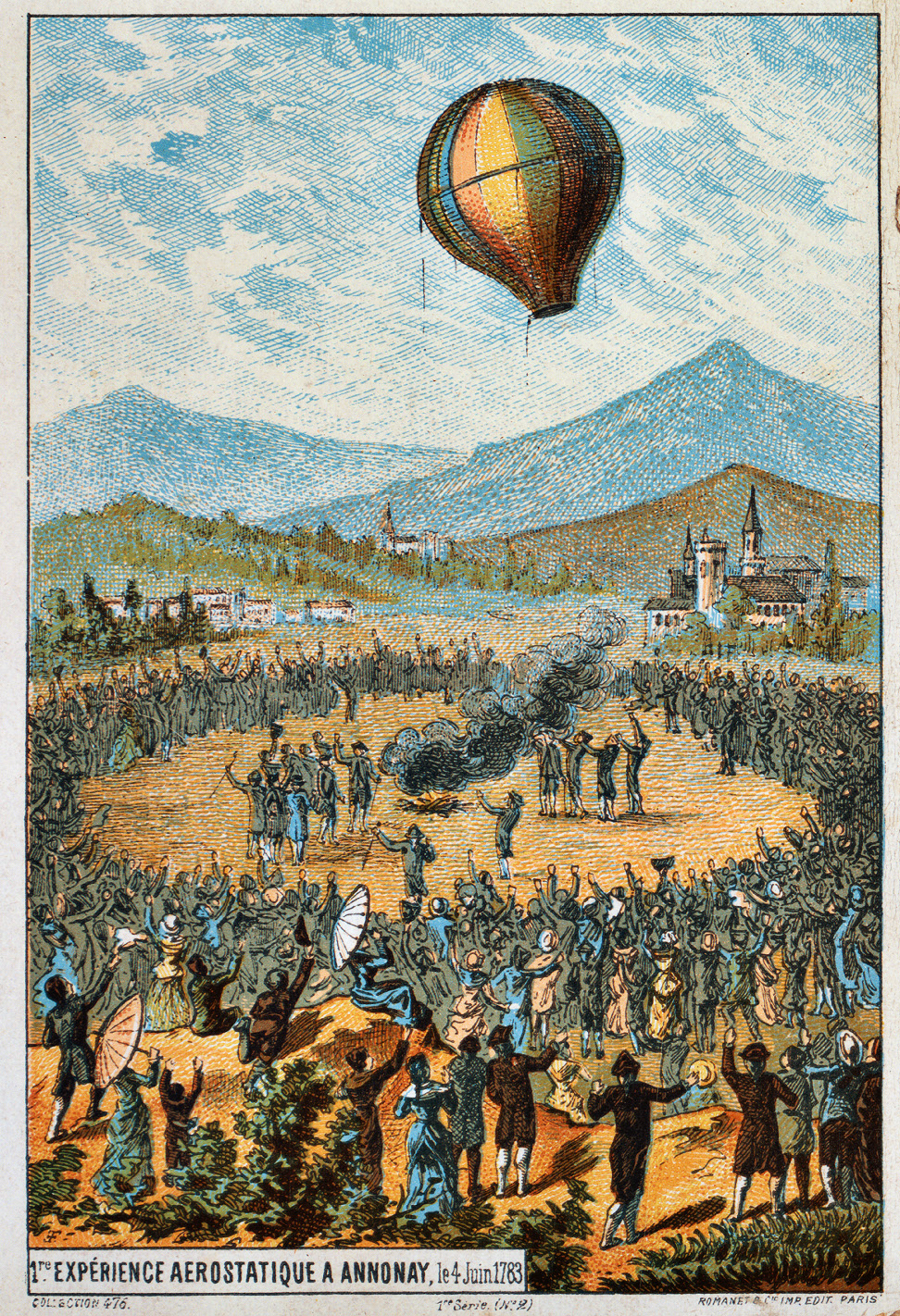 Competition now developed between the Montgolfier team and the Charles team to get the first human aloft. Although there are hints that the Montgolfier team might have achieved this even earlier, they definitely won with a public launch on the outskirts of Paris. François Pilâtre de Rozier and the Marquis ‘d’Arlandes flew across Paris for over 20 minutes, but then lost their nerve and let the fire die so that the vehicle would descend. Ten days later, Charles and a member of his team made the first hydrogen balloon flight. But it was too late. The Montgolfiers would always be known as the people who gave humanity flight.

Before the end of 1783, several humans had made their first flights in hot-air balloons, sometimes called Montgolfieres, and also in Charles’s hydrogen-filled devices. But it was not until January 10, 1784, that a Montgolfier brother ascended –– Joseph was part of a successful flight in Lyon that included six other passengers. That was the only trip for Joseph, and Jacques-Etienne never did fly.