A technical revolution in construction took place during the years 1100–1270 in northern Europe, especially England and France. During that period, a number of cathedrals of exceptional size and height were constructed in several cities. To achieve these stunning dimensions, particularly noticeable in the spacious interiors, the cathedral builders employed three technical innovations: the ribbed vault, the pointed arch, and the flying buttress.

These three elements were first used together at the cathedral at Durham, England –– although at Durham the ribbed vaults were essential to the first design and the pointed arch was not added until over a quarter of a century later. A vault is, so to speak, the three-dimensional equivalent of the two-dimensional arch. It is ribbed if it is provided with independent arches for stronger supports. The main purpose of a stone vault in a cathedral is to protect the building from fire by isolating the timber roof from the rest of the building. The vault also has an aesthetic function, giving the interior a soaring appearance in contrast to that of a flat, wooden ceiling.

Structurally, the vault at Durham, and in later churches, was made self-supporting by a system of diagonal and transversal ribs. Because of their pointed shape, these deflect sideways vertical pressure caused by the weight of the vault. The ribs were constructed first, and the space in between the ribs was then filled in. The ribs had, besides their structural function, an aesthetic function. They branch out from the top of the piers, giving the whole structure a unified look. 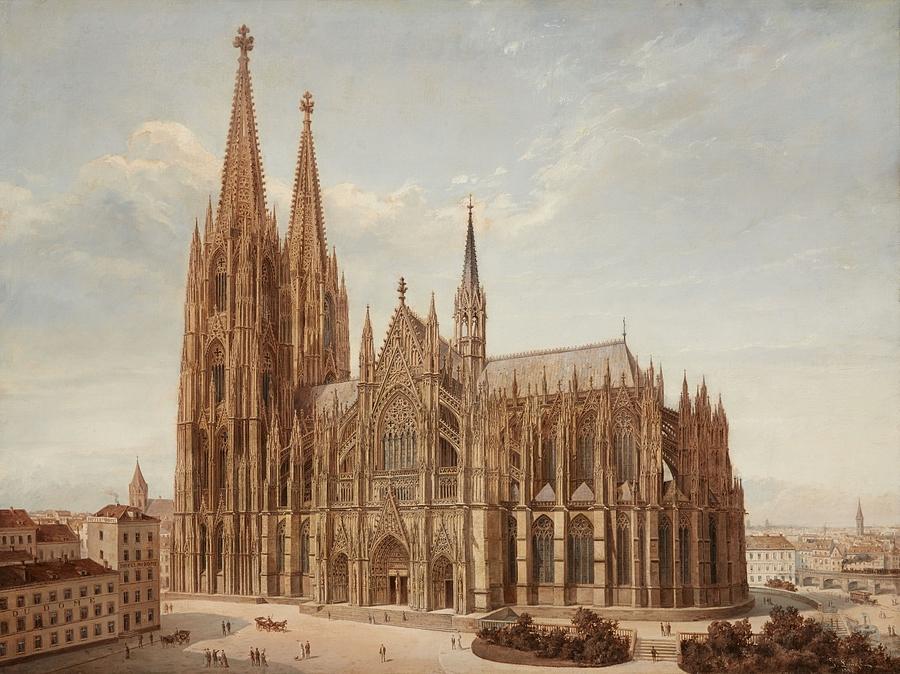 Because the ribs supporting the vault translated a vertical force into a transversal force, pushing the piers and supporting walls outward, the builders had to find a way to neutralize this force. They achieved this by building “flying buttresses” that in subsequent years would become the most remarkable feature in cathedrals throughout Europe. These were additional walls on the outside that were perpendicular to the walls of the vault. The basic structure of the Durham cathedral was replicated shortly afterward in a number of cathedrals in Europe. Religious fervor, but also competition between cities, pushed toward ever higher structures.

In France, the “Cathedral Crusade” was sparked by Suger, the abbot of the great monastery at Denis, near Paris. He was the main designer for the rebuilding of the church at St. Denis, which was completed in 1144. His friend, Bishop Henry of Sens, built the cathedral at Sens, which was completed in 1160. Both church buildings incorporated the three new elements of Durham Cathedral, but the structures were far lighter and less massive than those of Durham Cathedral. William of Sens went in 1174 to England where he rebuilt the Cathedral of Canterbury along the lines of the Cathedral of Sens.

Subsequently, the role of the flying buttresses, which became more complex structures, became more important in that they took over most of the support of the vault, allowing the replacement of the side walls by huge windows. The Notre Dame Cathedral in Paris, on which construction was started in the 1160s, is one of the examples of this new trend.

The vault of the Notre Dame, at 33.5 m (110 ft), was higher than anything built before. Soon an element of competition between cities came to the fore, and cathedrals with even higher vaults were built. The Chartres Cathedral has a vault at the same height as the Notre Dame, but the vaults at Rouen and Riems are 38 m (125 ft), the vault of Amiens Cathedral is 42.5 m (140 ft), and that of Beauvais is nearly 49 m (157 ft).

The cathedrals at Beauvais and at Cologne are the best examples of Gothic architecture in its most perfected form. All the walls are replaced by huge expanses of stained glass, the whole structure being supported by a complex system of buttresses at the outside. In France alone, about 80 cathedrals were built between 1150 and 1280.

Later the cathedral fever abated. Mainly because of the huge costs and the loss of population from the plague of the 14th century, many of the cathedrals were left unfinished. The construction of some of them –– Cologne is an example –– was not completed until the 19th century.