The greatest breakthroughs in physics occur when someone understands that apparently different phenomena have the same underlying cause. One of the great unifiers was Isaac Newton. Newton was the first to demonstrate that the falling of objects toward Earth’s surface, the motion of the Moon around Earth, the motion of planets around the Sun, and the odd trajectories of the comets are all governed by one law: the law of universal gravitation.

However, the idea of universal gravitation only became clearly formed in Newton’s mind in the 1680s, when he was preparing the manuscript for his Principia. He had had a first inkling of this idea some 20 years earlier. At the end of his life, Newton related that he started wondering whether one could consider the Moon as falling toward Earth when he observed an apple falling from a tree.

In 1666 Newton studied circular motion. He found that the force acting on a circling body is inversely proportional to the square of the distance of the body from the point around which it rotates. This result was also found by Christiaan Huygens, who published it in his Horologium oscillatorium in 1673. Newton tried to apply this concept to the Earth-Moon system and to the planets. He realized that the motion of the Moon could be viewed as having two components. One of these components is the Moon’s fall toward Earth; the other is its motion in a straight line. Both motions occur at once, resulting in the nearly circular path of the Moon. Its path is curved toward Earth because of Earth’s gravitational attraction. In the absence of Earth, the Moon would move on a straight line.

Newton first determined how much the Moon’s motion deviates from a straight line. He then compared the pull acting on the Moon with the pull acting on a body on the surface of Earth. Newton determined that a body dropped at Earth’s surface will fall 490 cm (16 ft) in the first second. He then found that the Moon deviates from a straight path –– and thus “falls” toward Earth –– over 366 cm (12 ft) during one hour. If the Moon were at the surface of Earth it would fall 490 × 3600 cm (16 × 3600 ft) in an hour. Now Newton compared this with the inverse-square law that he had derived for rotating bodies on Earth. Since the Moon is about 60 Earth radii from Earth, it would be accelerated toward Earth 602 (3600) times slower, which is approximately the case based on observation. (He actually found this factor to be 4000; the error was caused because Newton used an incorrect value for the size of Earth.)

Newton came to the conclusion that a force inversely proportional to the square of the distance from a body to its center of rotation keeps the Moon and planets in their orbits. In 1645 the French astronomer Ismael Boulliau had also suggested, without giving proof, that a central force inversely proportional to the square of their distance from the Sun might keep the planets in their orbits.

For a period after 1666, however, Newton turned his attention to optics and chemistry. In 1679 he again became interested in planetary orbits when Robert Hooke asked him to demonstrate that a planet would move in an elliptical orbit when subjected to a central force inversely proportional to the square of its distance from the Sun. Newton found a mathematical proof, but never forwarded it to Hooke.

Christopher Wren and Edmond Halley were also investigating the problem, but neither could solve it. In 1684 Halley, who was the clerk of the Royal Society, visited Newton and asked him what he thought the orbit of a planet might be under an inversesquare law. Newton immediately replied, “An ellipse, for I have calculated it.” Halley asked him to produce his paper with the calculations. Newton replied that he had mislaid this paper, but that he would start over with his calculations.

A few months later Halley received a paper from Newton called De motum corporum in gyrum (“on the motion of revolving bodies”), which Halley presented to the Royal Society. Halley’s interest spurred Newton to develop his ideas further. Over the next two and a half years he wrote the Principia. Halley edited the sections of the manuscript Newton sent him and saw it through the press, at one time employing two printers to speed up the process. Because the Royal Society had no funds available at the time, Halley paid for the printing of the Principia from his own pocket. 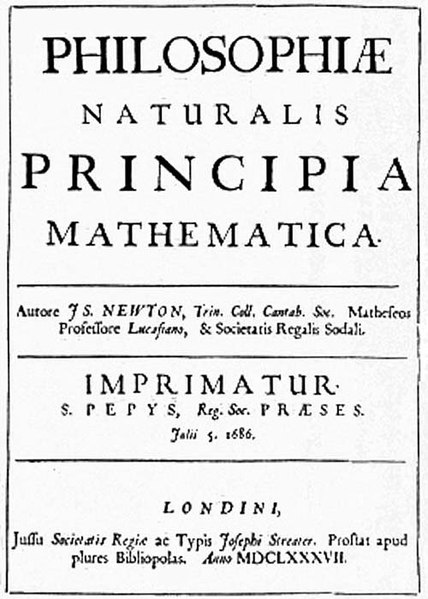 At an early stage of the writing of the Principia, Hooke discovered that Newton did not mention him in connection with the inverse-square law, which he believed he had discovered prior to Newton. Hooke, who had never given a mathematical proof, attacked Newton, and the dispute over the priority of the discovery furthered the bitter feud that had long existed between the two scientists.

The Principia was published late in 1687. Unlike Galileo, who wrote his books in Italian, Newton wrote the Principia entirely in Latin. Although he had developed calculus during earlier years, he drafted the book using classical geometry –– as was the custom at that time –– to tackle physical problems.

Book I of the Principia contains Newton’s three laws of motion and a discussion of orbital motion. Book II deals with the motion of fluids and attempts to prove that the vortex model proposed by Descartes cannot explain the motion of celestial bodies. Book III, The System of the World, contains the proposition that gravity is proportional to mass. In this book, Newton discusses applications of his theory to planetary orbits. He shows how his theory accounts for the irregularities of the motion of the Moon as well as the trajectories of comets.