Many fuzzy patches of light were observed in the night sky after the introduction of better telescopes at the end of the 18th century. Such patches were termed nebulae (“clouds”). During the first decades of the 20th century, astronomers realized that many of the nebulae were huge systems of stars like ours (galaxies). This idea was not entirely new. The German philosopher Immanuel Kant wrote in 1755 in his book General Natural History and Theory of the Heavens that our solar system belongs to a flat, rotating system that is only one of the many other “island universes” that exist.

The discovery of “island universes” began in 1912, when American astronomer Henrietta Leavitt studied Cepheid variables in the Large and Small Magellanic Clouds, two particularly large patches seen in the southern skies that were easily resolved into stars. Cepheids are a type of variable star for which brightness is periodic over time, with the period depending on the star’s size.

By measuring the length of the period one can calculate the true brightness, or absolute magnitude, of these stars. From the true brightness, it is easy to determine their distance. Leavitt found that the Magellanic Clouds were well outside our own galaxy at a distance corresponding approximately to twice the diameter of our galaxy. In 1924 American astronomer Edwin Powell Hubble succeeded in observing Cepheid variables in the spiral nebula in Andromeda and in other spiral nebulae. By comparing the apparent and absolute magnitudes of these variable stars, Hubble was able to determine the distance to the nebulae. He found that they were much farther from our galaxy than even the Magellanic Clouds. Thus, this class of nebulae consisted of galaxies with sizes comparable to the Milky Way — after this discovery the word nebula gradually ceased to be applied to the galaxies. 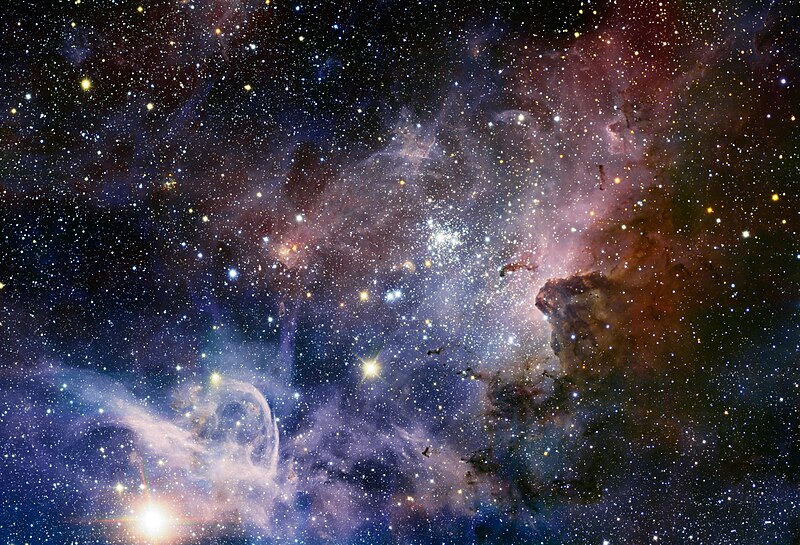 Some years before this discovery, American astronomer Vesto M. Slipher had been studying the spectra of spiral nebulae (that is, spiral galaxies). The spectrum of a star or galaxy not only discloses its chemical composition, but from the Doppler shift (a lengthening of wavelength — hence, also called the redshift) one can deduce its velocity relative to Earth. Such velocities had been expected to be randomly distributed. But when Hubble compared the distances of a number of galaxies with their redshifts, he made an astonishing discovery: The farther a galaxy the faster it is moving away from Earth. He also found that the recessional velocity is proportional to the galaxy’s distance. This observation became the basis of the theory that the universe was created by a huge explosion and that the galaxies are the debris flying in all directions.

One of the first to propose that the universe was created by such an explosion was the Belgian priest Georges Lemaître. In 1927 he published a paper in which he showed that the concept of an expanding universe corresponds with the cosmological models based on Einstein’s relativity theory, models introduced by Dutch astronomer Willem de Sitter and Russian mathematician Alexander Friedmann. Lemaître proposed that the universe had started by the explosion of a “primeval atom” — the concentration of all the mass of the universe in an extremely small space.

A more detailed discussion of such an explosion and its consequences, developed in 1948 by George Gamow, Ralph Alpher, and Robert Herman, became known as the big bang theory.

The strongest confirmation of the big bang theory was the discovery in 1965 of cosmic background radiation by two physicists from Bell Telephone, Arno H. Penzias and Robert W. Wilson. While experimenting with a very sensitive microwave antenna, they discovered a hiss at a wavelength of 7.35 cm (2.89 in.) with an intensity that seemed independent of the orientation of the antenna.

Such radiation had been predicted by Gamow. The hiss corresponds to radiation emitted by a body at a temperature of 3K (–270°C or –454°F), the temperature to which the universe is believed to have cooled as a result of its expansion since the big bang.