While Thomas Alva Edison is remembered mainly as an inventor, he also made one extremely useful scientific discovery, now known as the Edison effect.

He found that electricity flows through space from a heated metal. When the electron was discovered, the Edison effect was explained as electrons boiling off the metal, like water vapor from a heated tea kettle. Sir John Ambrose Fleming in 1904 developed the first practical application of the Edison effect. Electrons travel only to a positively charged anode. Since alternating current switches back and forth from negative to positive, the Edison effect can be used to turn alternating current into direct current. A device that does this is called a rectifier.

The Edison effect is much more effective in a vacuum, so Fleming’s device was enclosed in a partially evacuated glass tube. In America such a device is still called a tube (in England, it is a valve). Later inventors, notably Lee De Forest, found other ways to use the Edison effect in tubes. De Forest showed how to use tubes as amplifiers, for example.

De Forest’s tubes greatly improved the radio, which had previously relied on crystals for rectification and earphones instead of amplification. It was not clear before De Forest’s time why crystals could change alternating current to direct. When tubes came along, almost no one bothered to wonder why.

Tubes do not depend merely on the flow of electricity, as previous devices, such as electric motors, lights, or heaters, do; instead, they depend on control of the behavior of electrons. Therefore, we speak of devices that use tubes as electronic, not merely as electrical.

Tubes made possible such electronic devices as radio and television, but they had drawbacks: Heating a metal eventually causes it to boil away; the vacuum also tends to degrade. The power required for the Edison effect is fairly high; heat tends to build up in the vicinity of the tubes; and practical tubes have to be fairly large. While these problems were only a minor annoyance in building radio and television sets for the living room, they limited the size of portable sets. Also, when the first digital computers were built at the end of World War II, the many tubes needed used enough power to cause lights to dim. In addition, the computers produced immense amounts of heat that had to be got rid of, they occupied large rooms, and they failed with such frequency that it was clear that larger computers could never be built.

Although almost no one wondered why crystals, which are semiconductors, work as rectifiers, scientists at Bell Laboratories decided in the late 1930s that it was worth looking into this question. One of them, William Shockley, wrote in 1939 in his lab notebook, “It has today occurred to me that an amplifier using semiconductors rather than vacuum tubes is in principle possible.” Shockley found that some crystals worked better than others. The ones that worked best were impure crystals of germanium.

By December 1948, Shockley, abetted by theoretical physicists John Bardeen and Walter Brattain, was able to modify the impurities to produce crystals that could also be used like a De Forest tube for amplification. The physicists called their new crystals transistors. 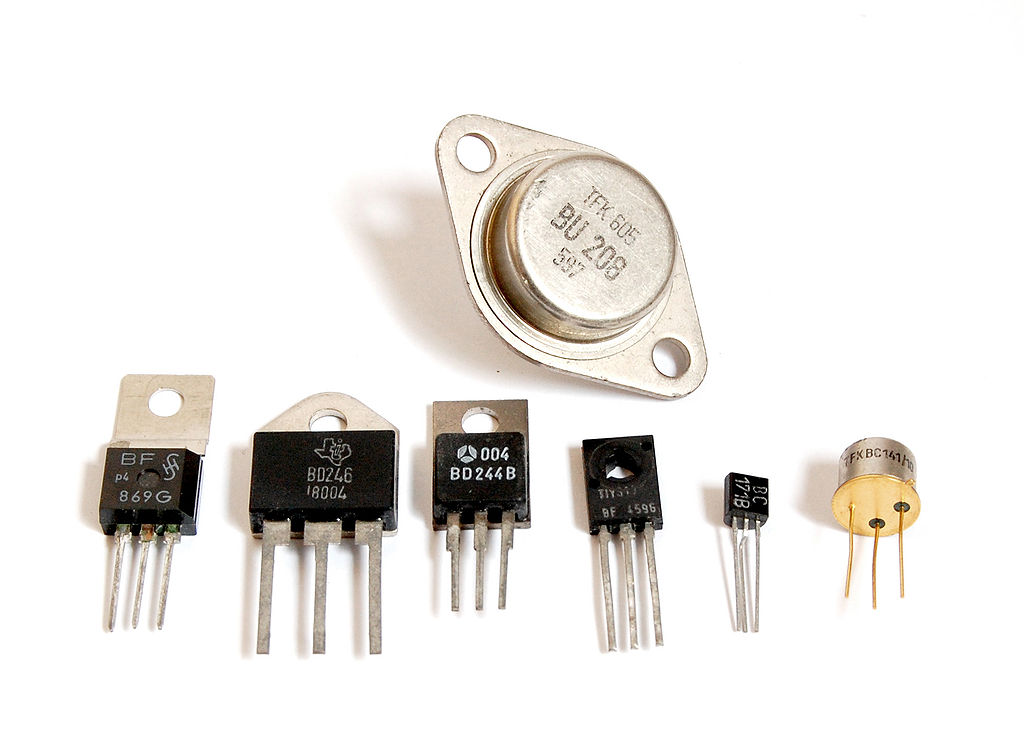 The transistor had none of the problems of the tube. It was small, needed no vacuum, did not wear out easily, and produced little heat. Soon transistor radios were the rage. The scientists won the 1956 Nobel Prize for physics. Large commercial computers, starting with Remington-Rand’s UNIVAC, could be built.

What people did not fully realize –– except for a few penetrating thinkers like Richard Feynman –– was that the transistor was just the beginning. The transistor works because it is possible to adjust the impurities in a crystal so that one region has an excess of electrons while another has a deficit. Electrons will flow from one region to the other just as electrons cross the space between the cathode and anode in a tube. But there is no need for heat to be used; and since this is all happening at the molecular level, not a lot of space is required. A transistor can be made very small indeed. In fact, a transistor can easily occupy just a small region on a crystal. So you can put more than one transistor on each crystal.

And that is what scientists did. Beginning in the 1960s, ways were found to pack more and more transistors onto a given piece of crystal. Such a piece came to be called a chip. A chip is usually a fingernail-sized sliver of silicon “doped” with impurities in a pattern that enables it to serve as a computer memory or a central processing system or a controller of fuel injection in an automobile.

The chip has made possible the incredible increase in power and availability of the personal computer. It has also invaded almost all aspects of daily life, controlling everything from your microwave oven to your car.